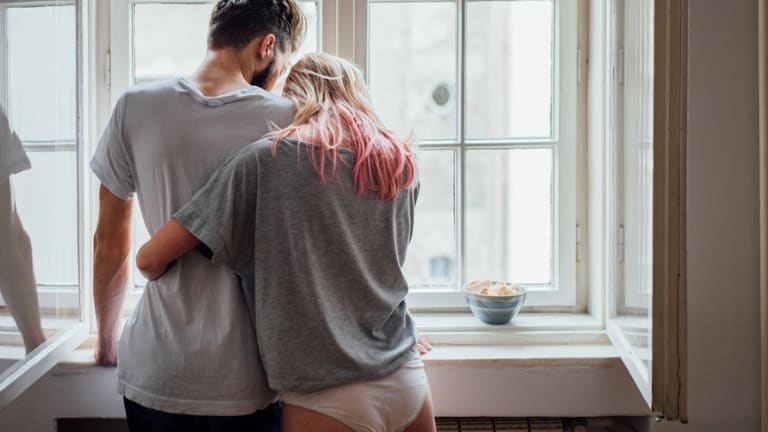 Sex didn’t used to be a chore.

Years ago, before having a baby was ever even a notion, I'd read a phrase I'm about 80 per cent certain I can quote verbatim: Having sex with someone you love is even better when you're trying to make a baby.

I wish I could remember who wrote this. Not so I can attribute the quote correctly, but so I can track down the author and shove my test-negative pregnancy sticks down her throat.

If you're older than 40 and your biological clock has sprung a few coils there is nothing even remotely appealing about having sex to make a baby.

Making – or trying to make – a baby is work. And like all work that requires physical exertion, two-party collaboration and an increasingly tight deadline, it's enormously stressful. Who even cares if the other person involved is someone you love? This has nothing to do with love. This is about creating a family.

To be honest, I don't need a baby. I've already had one. Although, at three years old, she's not much of a baby anymore. Not only can she speak, she can sing Psycho Killer in its entirety. She's capable of advanced negotiating skills and can make a reasonably convincing case for a) Wearing only dresses to day care b) Eating only cake for breakfast c) Very badly needing a younger sibling (preferably a sister to play Anna to her Elsa). Her pleas can't be good for my reproductive sanity.

I've been trying to grant her this request for a sibling for almost a year. So after a self-diagnosis confirmed by no less than three internet sources, I made an appointment with my doctor to discuss a cure for secondary infertility, the condition in which women who've already given birth find themselves incapable of re-reproducing.

"Let me start by asking you a question," said the doctor. "Are you having enough intercourse?"

The answer to this question is no. Definite no. By any standard. Ask anyone. But I was reluctant to come right out and say it, so instead I stalled with another question. "What do you consider enough intercourse?"

"If you are trying to get pregnant, you should be having intercourse at least two to three times per week during your cycle."

I let out an audible whimper. Two to three times per week? What, am I supposed to quit my job? I have a full-time career, a toddler and a heap of laundry that refuses to wash itself. My daycare has a takeaway food service that I never use because I don't have time to place the online order (24 hours in advance? Ha!). I still have an unused gift certificate for a 45-minute massage that I got for Christmas. In 2015.

Two to three times per week?

I've spent a fairly large sum of money on ovulation monitor kits (40 bucks a month, just saying) specifically to avoid the affront of regular sex. Just adding the ritual of peeing on a stick to my already crowded teeth-brushing, moisturiser-applying bedtime routine is a major effort.

It's a secret, guilty pleasure to discover that my hormone levels have not surged, that I am perfectly free to spend the rest of my evening reading one more paragraph of Lincoln in the Bardo before I fall asleep with my glasses on. And don't believe, not for a second, that I am alone in this non-conjugal glee. I'm pretty sure that my husband's four favourite words in the English language are "you're off the hook."

Two to three times per week?

There was a time when two to three times per week was not an issue, when we could engage in the fun kind of intercourse, the unpredictable kind that allowed for twist endings. The kind that didn't demand results until accidentally (or miraculously, if you prefer), we did get a result, and then that was pretty cool, too.

But that hasn't been the case for a while. Intercourse is now a twice-a-month (at best) ordeal, dictated whenever my luteinising hormone decides to rear its awful head. The motions are robotic, the outcome is predictable. There is nothing even mildly romantic about this encounter.

I do have to admit: On nights when I am not forced to perform exhausting baby-making duties, I sometimes allow myself to fantasise about how idyllic life would be if we decided not to add a newborn to our wonderful, loving and perfectly complete three-person family. I might finally be able to finish Lincoln in the Bardo. And one day, in the not-so-distant future, I might even rediscover what it means to Netflix and Chill with someone I love. It doesn't have to happen often, but it would be nice to experience that long-lost, supposedly pleasurable, art of having sex when you're not trying to make a baby.

Van der Kwast writes about her complicated relationships with parenting and food. Since writing this article, she has started visiting an acupuncturist. She has also finally tested positive on a pregnancy stick. One thing may or may not have anything to do with the other.