When Adelaide gym HTFU, that’s "Harden the Fat Up" posted "before" and "after" photos of a classic weight loss transformation, they hoped it would attract new clients. And to be fair, it did. But along with a handful of new members, the gym also attracted a backlash from social media users accusing them of fat shaming.

The wording of the post was brutal. “Let me guess ladies,” the post began, “You feel unfit, unattractive, self-conscious and worthless… especially when standing in front of the mirror naked.

“You feel embarrassed and ashamed getting naked in front of your partner…you are sick and tired of picking outfits that hide fat… and you want to feel comfortable in your own skin.” 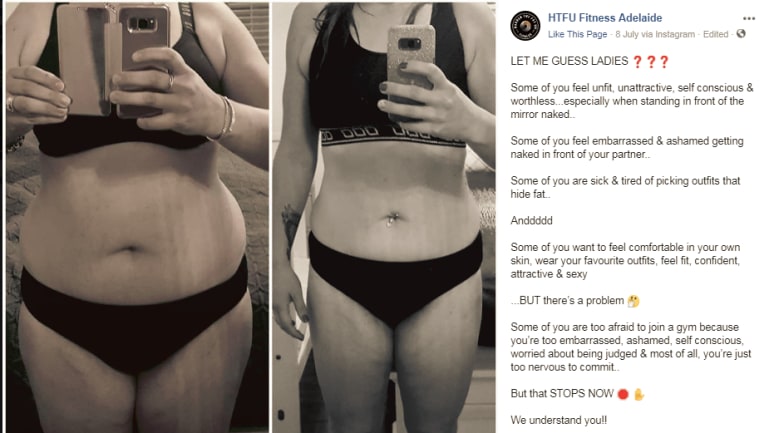 The assumption that being bigger than a size 10 automatically makes women feel worthless was met with fierce criticism. The post was labelled “gross” and “deplorable”. But despite the backlash, the gym is unapologetic. Writing in the comment section, a spokesperson said that the only thing they will change in future posts is to clarify that while not all women feel this way, some certainly do.

“Apart from that we make no apologies … if you read it properly with an open mind you will see we’re stating the truth on how ‘some’ women feel about themselves at the moment, how they want to feel and what they know they need to do to feel better,” the spokesperson wrote.

We feel this way because we are bombarded with messages that equate self-worth with body size from the moment we can see. It comes from fashion, magazine covers and advertising. And it comes from unintentionally loaded exchanges like hearing women praising each other for looking slim or being “naughty” for eating cake.

Studies from places as diverse as the United States, Brazil and Finland all show high rates of unhappiness with our bodies. For some women, this manifests as eating disorders or body dysmorphia. For others it’s self-loathing, a constant stream of negative self-talk sucking the joy out of life. One survey from Glamour found that 97 per cent of women experience at least one ‘I hate my body’ moment a day.

HTFU, along with the rest of the weight loss industry, would like us to think that the solution to this problem is changing our bodies; it’s not.

So what’s the solution? I don’t know. But it might lie somewhere between celebrating body diversity and mastering self-acceptance. It’s a tall order, but there are several body positive movements giving it a shot.

Actor and presenter Jameela Jamil (The Good Place) is tackling the body image problem through "I Weigh"an instagram community that celebrates the things that women value about their lives. “[it’s a way] to feel valuable and see how amazing we are, and look beyond the flesh on our bones,” she writes.

The movement came about after Jamil tweeted about a social media post that detailed how much each member of the Kardashian clan weighed. Describing the post as “toxic” she wrote: “This is how women are taught to value themselves. In kilograms. Grim.”

In response Jamil tweeted a photo of herself with the words, “I weigh: lovely relationship, great friends, I laugh every day, I love my job, I make an honest living, I’m financially independent, I speak out for women’s rights, I like my bingo wings, I like myself in spite of EVERYTHING I’ve been taught by the media to hate about myself.”

Since then, thousands of women have shared what they “weigh” – celebrating their friends, families, personalities, sexuality, adversities and achievements.

Jamil isn’t alone in trying to tackle our collective body image problem. Other movements such as Jessica Vander Leahy’s Project Womankind, Taryn Brumfitt’s Body Image Movement and Body Positive Australia are all working hard to remind women that they are more than their body.

So yes, HTFU, you’re correct in asserting that some women do feel worthless because their bodies are less than the societally dictated perfect. But you’re wrong to say the answer lies inside a gym. It’s not women’s bodies that need to change – it’s the message.