High amounts of salmon, cod and haddock lowers women’s risk of dying from Alzheimer’s disease by 38 per cent, while a fishy diet decreases men’s risk of passing away from chronic liver disease by 37 per cent, a Chinese study found.

Yet, omega-3’s benefits only occur if fish is baked, grilled or poached, with frying increasing the risk of heart or lung-related deaths in women.

This is thought to be due to frying causing the development of trans fatty acids, which raises calorie levels in meals, according to the scientists. 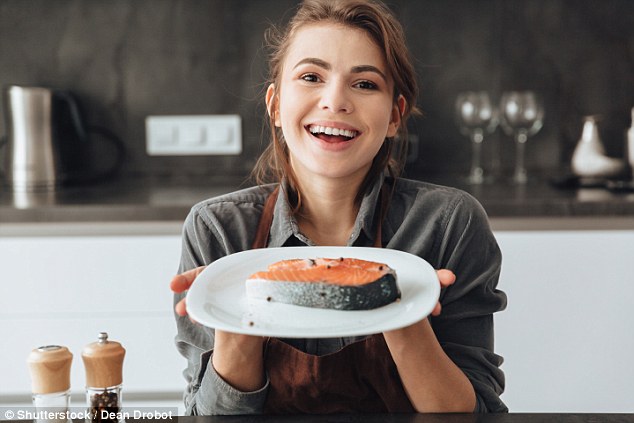 DOES FISH BOOST CHILDREN’S IQs AND HELP THEM SLEEP?

Children who eat fish just once a week have higher IQs and sleep better, research suggested in December 2017.

Consuming seafood at least once every seven days improves youngsters’ IQ scores by 4.8 points compared to those who never eat it, a study found.

Frequently eating fish also makes children less likely to wake in the night, be tired during the day and resist going to bed, the research adds.

Previous research reveals certain types of fish contain omega-3 fatty acids, which play a role in the growth and development of nerve tissue and may therefore boost intelligence.

These fatty acids also play a role in the production of the hormone melatonin, which regulates sleep and wakefulness.

Fish consumption between the ages of nine and 11 was determined via a questionnaire that asked the children how often they eat fish in a typical month. The questionnaire did not specify types of fish.

The children’s sleep was measured by their parents completing a questionnaire that asked about the youngsters’ hours of sleep a night, resistance at bedtime, sleep anxiety, night-time waking and daytime tiredness.

Their IQ was investigated by assessing their arithmetic, vocabulary and understanding of information, as well as their ability to arrange images and sort codes.

The participants’ diets were assessed via food questionnaires, as well as their overall health being monitored.

A fishy diet also reduces women’s risk of dying from heart disease by 10 per cent.

When the researchers specifically analysed the participants’ omega-3 intakes, they found men and women with the highest levels are 15 and 18 per cent less likely to die from heart disease, respectively.

Yet, frying fish raises women’s risk of dying prematurely and cancels out any omega-3 benefits in men, the study found.

The scientists wrote in the Journal of Internal Medicine: ‘Consumption of fish and [omega-3s] was robustly associated with lower mortality from major causes.

‘Our findings support current guidelines for fish consumption while advice on non-frying preparation methods is needed.’

Getting drunk young nearly doubles the risk of an early death

This comes after research released in June 2017 suggested people who get drunk before their 15th birthday are nearly twice as likely to die early.

Those who get inebriated at a young age are 47 per cent more likely to die prematurely.

Other experts add excessive alcohol consumption at a young age can increase a person’s ‘risk-taking behaviour’ and lead to mental health issues.